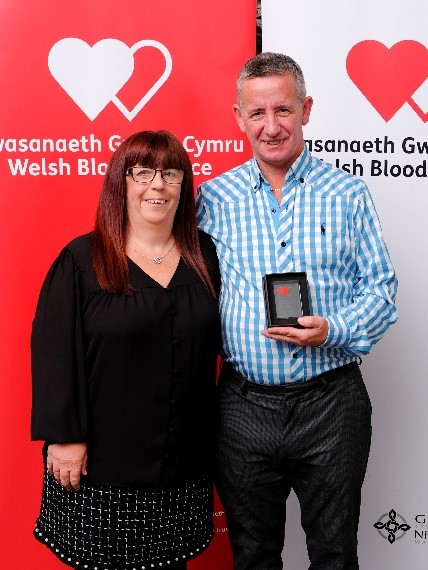 An Aberystwyth man, who is one of Wales’ longest serving blood donors, is encouraging local residents to “make a difference”, after being recognised for reaching 100 blood donations.

“My wife Tina, a Registered Nurse, who is also a blood donor, asked if I could take her place when she was unable to donate one day. I didn’t hesitate to give blood, that was back in the 1980’s and I have been regularly donating ever since.

“That simple act has potentially saved 300 lives over the years and I want to take this opportunity to personally thank Tina for setting me on my lifesaving journey.

“The Welsh Blood Service staff are so friendly and are always there to help you. If you are considering becoming a blood donor, there’s opportunities all across Wales for you to start donating.

“It doesn’t take long, in under an hour you can be in and out, knowing you may have saved three patients’ lives. The positive feeling you get after you make a donation knowing you could have helped people in need is second to none.

“If you are not able to give blood yourself you can still make a difference by encouraging others to step forward and become a donor like my wife did with me.”

Blood transfusions are vital in supporting patients in need across the country, from emergency situations such as serious accidents and childbirth complications to supporting cancer patients during chemotherapy treatment.

The evenings recognised milestone blood and bone marrow donations. Collectively the attendees made 1,800 donation which potentially could have saved up to 5,400 lives.

Bone marrow donor, 21 year old Agricultural College Student, Awen Davies, from Ferwig, just outside Cardigan, was also recognised for her bone marrow donation after being selected as the best match for a patient in need of a transplant from a database of over 35 million donors from across the globe.

On receiving her award Awen said:

“My family have always donated blood so I was quick to follow in their footsteps as soon as I was able to, so just after my 17th birthday. After becoming a donor my cousin was also diagnosed with a brain tumour and this made me even more determined to do something to help people in need. Blood donations are not only used in emergencies, they are also used in cancer treatment and surgeries.

“I joined the bone marrow register when I went to give blood and shortly afterwards I was matched with a patient, a 37 year old mother of two from Australia. The donation was easier than I thought, there was no pain or discomfort and it was incredible to think I was really helping someone.

“I have since received a letter from the mother to say the transplant had been a success and to thank me for giving her the chance to see her children grow up, it was really emotional, I was so pleased.

“I can’t tell you what an amazing feeling it is to know you have given someone a chance to spend more time with their children.”

“I hope that this encourages more 17-30 year olds who give blood to join the Welsh Bone Marrow Donor Registry, you could be the only match in the world capable of helping someone in need.”

It is now easier than ever to make an appointment. To start your lifesaving journey, click here.