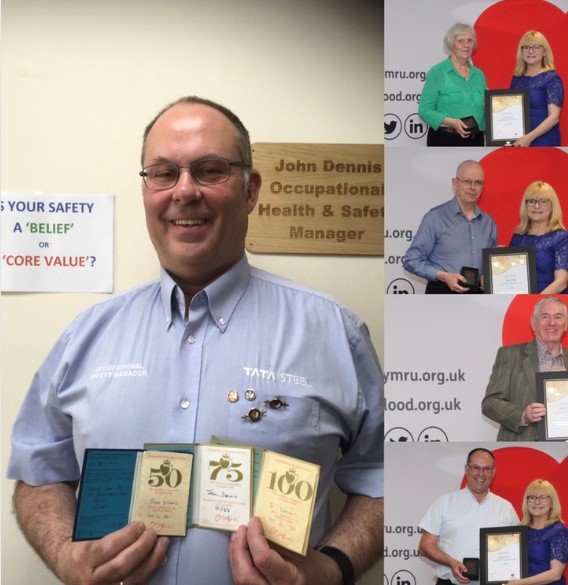 Donors Mark Iliffe, John Dennis, Selwyn Roberts and Anne Mann were recently recognised by the Welsh Blood Service for reaching the milestone of 100 blood donations, a milestone which takes at least 30 years to achieve.

Between them, the 441 units they have donated could potentially have saved up to 1,300 lives.

Speaking at a Welsh Blood Service ceremony to recognise milestone donors that have given 50, 75 and 100 units of blood, the donors joined forces to make a plea for more young people to become blood donors.

Mark Iliffe, 67 of Whitchurch, Cardiff, has been donating blood for over 50 years, making his first donation in the 1960s.

Mark said: “From a young age, I had wanted to give blood donation a try. My mother regularly gave blood when I was growing up and my younger brother Paul, who was born prematurely may not have lived to see today if it were not for the blood transfusions he received when he was just a baby.

“Realising that the 100 donations I’ve made over the years may have saved or improved up to 300 lives has made me feel on top of the world, and reinforced the motivation that has kept me giving since I was 18.

“World Blood Donor Day is a great time to look at the next generation of donors, I’ve been giving blood for half a century next year and I’m sure if more people saw the difference giving blood makes – like I have, they would understand just how priceless a gift it is.”

John Dennis, 58 of Lliswery, Newport, has seen the benefit of donating after his brother had to receive blood. John said: “Giving blood is one of the most rewarding experiences I have ever had.

“My brother Graham was recently hospitalised with anaemia, and had to receive blood as a consequence. Knowing that each one of my 100 donations has gone to help other patients in hospital has made giving blood over the years all the more enjoyable.

“I would encourage everyone, especially the younger generations to consider giving blood if they can this World Blood Donor Day, your decision to donate could save someone’s life.”

Selwyn Roberts, 74 of Porth, who now resides in Pontyclun, has already started to share the importance of blood donation with his grandchildren.

Selwyn said: “I would encourage anyone toying with the idea, especially the younger generations, to sign up and think of the difference you could make by giving blood, it doesn’t cost you money, and it isn’t painful.

“I started giving blood while working as an apprentice aged 18 years old. I didn’t start donating for any particular reason, however my daughter received a blood transfusions during childbirth. It was always my ambition to help other people in need, the same way someone has gone on to help my daughter during her hour of need.”

Anne Mann, 63 of Treorchy, made her first donation at the age of 21 in England and continued to donate in Wales after moving from the West Midlands in 2004.

Anne said: “My father regularly gave blood throughout his lifetime, making over 100 donations. I first thought about giving blood in the 1970s following the troubles in Northern Ireland and the pub bombings in Birmingham, close to where I was living at the time.

“I was always happy to donate, in the knowledge that my blood may go on to help others who are in need of transfusions. My daughter lost blood following an operation at hospital, and therefore required blood transfusions.

“This World Blood Donor Day, consider giving blood, especially the younger generation. Make an appointment to donate, it’s an hour maximum out of your day and by doing so, you could be giving someone and their family vital extra time together.”

Friday 14 June marks World Blood Donor Day, an awareness day for blood services across the globe to promote the importance of giving blood and the benefits it has on patients in need.

Blood and platelet donations can be used to help support patients in need across the country, from emergency situations such as serious accidents and childbirth complications to supporting cancer patients during chemotherapy treatment.

“Blood stocks at the moment are in a healthy position and we have our loyal donors across the country to thank for helping us ensure we maintain a steady supply of blood products to the 19 hospitals we support across Wales.

“We know how difficult it can be for people to find an hour of spare time to donate which is why occasions such as World Blood Donor Day can really help encourage the next generation of milestone donors to take that first step.

“We need to continue increasing the number of people who donate, particularly those aged between 17 and 30 years old. If you’ve thought about giving blood before, now is a great time to try.”

The Welsh Blood Service needs to collect 350 blood donations every single day to supply hospitals with blood for patients in need. The Service relies entirely on the generosity of donors coming forward to save lives across Wales.