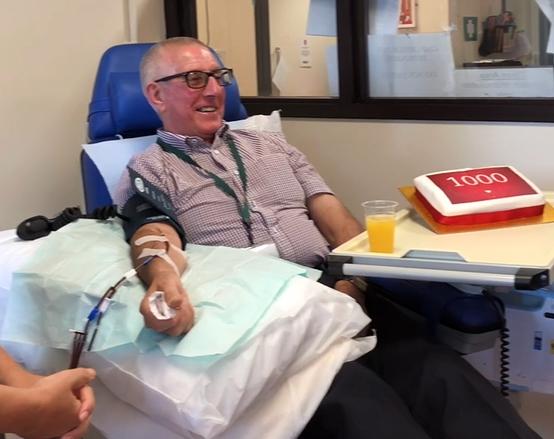 A retired steelworker from Caerphilly is calling on more people to give blood or platelets this World Cancer Day (February 4th) after he reached an incredible 1,000 donations for the Welsh Blood Service, a milestone which took over four decades to achieve.

Colin Bunston, 74, made his first donation back in 1977 as a blood donor before switching to apheresis platelets in 1990. The donations made could have saved thousands of patients, including those receiving chemotherapy as part of their cancer treatment plan.

After making the landmark 1,000th donation, Colin said: “I was reluctant in the beginning for one reason only, I wasn’t particularly keen on someone sticking a needle in my arm. But it’s something you get over. I made the commitment, there’s nothing to it.

“Not many people know about platelet donation, I found out through giving blood and I was interested. It takes longer – up to 90 minutes, but you can donate more often, it’s in my diary every three weeks.”

Platelets are found within the blood stream and can be collected either through pooling together four matching blood donations or through a process called apheresis. Apheresis donations take blood from a donor and transfer it through a specialist machine which separates the platelets before safely returning the blood’s red cells to the donor.

“I didn’t think that I’d ever reach 1,000, it sort of creeps up on you! You notice over the years you’re getting closer and when you get to 900 you start to think it’s in reach.” said Colin after reaching the milestone.

Each year the Welsh Blood Service needs to collect 100,000 donations to help support 19 hospitals across Wales.

“World Cancer Day is an opportunity for us to share why it’s so important to give blood, platelets or bone marrow through the Welsh Blood Service and thanks to people like Colin, we’re able to provide a truly lifesaving Service.

“To make 1,000 donations is an incredible achievement, one that only a handful of people will ever achieve. Not only does it display years of commitment to donating from Colin, but also hundreds of hours in a donation chair on behalf of patients in need.

“Colin has truly been a hero for so many people, including patients in their battle against cancer, who will never have the chance to thank him personally. On behalf of the thousands of recipients across Wales who have benefited from Colin’s commitment, I would like to say thank you.”